The “New Music” in John Cage’s Thought. Part I

Abstract: We are going to discuss the most innovative musical contributions produced by John Cage. Our intention is also to identify some significant connections with philosophical ideas of the same period pointing out in this way the fact that the artistic thought of the 20th century was strongly connected to the achievements of scientific knowledge of the time and to the philosophical thought and methods specific for that period. We are also going to establish some connections between Cage’s musical innovations and the contribution of some avant-gardist painters. In the final part of this article we will point out some connections between Cage’s music and certain philosophical ideas, especially those promoted by Henry Bergson, taking into account Cage’s “Lecture on Nothing”.

The art of the 20th century or what is usually called the avant-garde and the contemporary art means a profound change from what the European artistic thought had conceived before. All the types of art changed dramatically their methods of expression and sources of inspiration during this century including music. Starting with the dodecaphonic music created by Arnold Schonberg, the music of the 20th century or “the new music” in Theodor Adorno’s words (Adorno 1962) proposed us an extended exploration of sounds which made possible a wider expression of feelings and sensations somehow in accordance with the evolution of the human being during the new epoch of industrialization and new technological thinking which changed a lot our way of understanding life and our place and role in the world.

One of the musicians who followed and also developed the dodecaphonic music was the American John Cage (1912-1992). He is considered a neo avant-gardist artist being strongly influenced by Arnold Schonberg. He was a composer, music theorist and artist. He is considered as one of the most influential artists of the 20th century due to his explorations in the indeterminacy or chance in music, electro acoustic music and unusual use of musical instruments.

We are going to discuss his most innovative musical contributions pointing out in the same time some aspects of his biography which marked significant moments in his artistic carrier. Our intention is also to identify some significant connections with philosophical ideas of the same period pointing out in this way the fact that the artistic thought of the 20th century was strongly connected to the achievements of scientific knowledge of the time and to the philosophical thought and methods specific for that period. There is a specific meaning of the artistic style: the cultural style. This type of style does not belong to a certain artist; it is not an analysis of an individual way of expression. It refers to an entire cultural period including groups of artists, cultural movements and even a wider perspective which include also the modernization of the human thought, generally speaking, during that period. The cultural style of the 20th century is manifest also in John Cage’s artistic productions.

In 1928 John Cage graduated his high school studies and received a prize in a competition for ingenious propositions: his proposition was “A day of quiet for all Americans”. He said that by being silent, people should have the opportunity to hear what other people think [1]. In this way the young John Cage anticipated his work 4’33” by more than 30 years.

He then started to visit Europe for 18 months. In Paris he followed courses of various arts (Gothic and Greek architecture, painting, poetry and music). Meanwhile he got familiar with contemporary music especially with works written by Igor Stravinsky or Paul Hindemith as well as with classical music especially J. S. Bach. When visiting Spain, he manifested a deep interest in theater, witnessing “the multiplicity of simultaneous visual and audible events all going together in one’s experience, producing enjoyment”. These words could be considered as another anticipation of his future interest in other type of art happenings.

In 1933, after his cultural visit to Europe, he focused on music rather than painting and already wrote compositions based on a 25 tone row similar to the 12 tone row of the dodecaphonic Schonberg’s music. At that time, Henry Cowell [2] advised him to address to Arnold Schonberg himself for class composition. It seems that Cage did not have the money to pay the classes but promised to the composer to dedicate himself for his entire life to music. The composer offered to tutor him free of charge. He studied two years with Schonberg in California at UCLA. Schonberg was not at all impressed by Cage’s composition abilities. In a later interview, he said that none of his American students was a valuable composer. However, referring to Cage he added: “there was one... of course he’s not a composer, he’s an inventor – of genius” [3]. Cage adopted this appreciation and he always denied being a composer.

He had numerous jobs including dance accompanist at UCLA. This activity determined his lifelong association with modern dance. He produced music for choreographies.

He also started experimenting with unorthodox instruments (household items, metal sheets, etc.), thinking as Oskar Fishinger that “everything in the world has a spirit that can be released through its sound” [4] and hence he began exploring the sounds produced by hitting various non-musical objects – a form of experimental percussion music. Cage organized a percussion ensemble that toured the West Coast and brought him a certain fame. His experiments seem similar to the readymades proposed by Duchamp as new objects of art. Non-musical objects were similar to what was unusual for artistic objects in an exhibition (a wheel for bike, a bottle dryer, a shovel, etc.), they were only objects of daily life. However, Marcel Duchamp brought them in art exhibitions naming them “readymades”. His idea revolutionized the artistic thought of that time raising a significant question for the world of art: which objects should belong to art and which not.

The same question appears now by John Cage’s challenge: the objects he used for percussion were not musical instruments, they belonged to the daily life and the sounds they produced were not considered musical sounds in the classical tradition. The most famous work is Water Walk. There are also other works as Imaginary landscape 4 (for 12 radio receivers), First construction, William Mix, Variation III

“When I hear what we call music, it seems to me that someone is talking. And talking about his feeling or about his ideas of relationships. But when I hear traffic, the sound of traffic – here on Sixth Avenue, for instance – I don’t have the feeling that anyone is talking. I have the feeling that sound is acting. And I love the activity of sound ... I don’t need sound to talk to me” [5].

We have to mention that the interest for noises and non-musical sounds was also explored by the Dada artists in those soirées dadaïstes organized in Zurich and later on in Paris by Tristan Tzara, Marcel Janco, Richard Huelsenbeck or Kurt Schwitters. The Dadaist artists explored the sonorities of pronounced words or only simple parts of words in what they called poèmes bruitistes. See for example Hugo Ball’s Katzen und Pfauen and Gadji Beri Bimba, Kurt Schwitters’ Oowenduumir, Simultangedischt or L’Amiral cherche une chambre à louer written by Tristan Tzara.

In 1940  John Cage’s reputation was enhanced further as he invented the prepared piano – a piano which had had its sound altered by objects placed on, beneath or between the strings. See for example Sonatas and Interludes (for prepared piano) and Suite for toy piano in which John Cage uses a real toy-piano. This concept was originally intended for a performance staged in a room too small to include a full percussion ensemble and the sounds produced by that prepared piano seemed to satisfy Cage’s percussion purposes. Cage also met the dancer Merce Cunningham who was to become his lifelong partner and artistic collaborator.

In 1941, Laszlo Moholy Nagy [6] invited him to teach at the Chicago School of Design and then, in 1942 he moved to New York and lived together with Peggy Guggenheim and Max Ernst in their house. He had thus the opportunity to meet the great artists of the time: Marcel Duchamp, Piet Mondrian, André Breton, Jackson Pollock, and others valuable artists of the time. Such meetings and talks helped him to reach a better understanding in exploring topics of the artistic thought and to clarify his own way for new explorations.

In 1952, Cage composed his best known and most controversial creation: 4’33”. The score instructs the performer not to play the instrument during the entire duration of the piece and is meant to be perceived as consisting of the sounds of the environment that the listeners hear while it is not performed. There is another silent work, 0’00” (dating from1962 – also known as 4’33”no.2). The score of 0’00” consists of a single sentence: “In a situation provided with maximum amplification, perform a disciplined action”. The first performance had Cage who simply wrote that sentence.

These works prove his interest in silence considered, from an artistic point of view, as valuable as the action of sounds.

The year 1946 represents for John Cage his meeting with Indian philosophy and music and with D.T. Suzuki’s lectures on Zen Buddhism and works by Coomaraswamy. The first works inspired by Indian concepts were Sonatas and Interludes (for prepared piano). The goal of Indian music is “to sober and quiet the mind thus rendering it susceptible of divine influences” as John Cage usually said.

In 1951 he discovers I Ching, the Chineese classic text which describes  a symbol system used to identify order in chance events. The I Ching is commonly used for divination but for Cage it became a tool to compose using chance or indeterminancy. To compose a piece of music, Cage would come up with questions to ask the I Ching. For Cage this meant “imitating nature in its manner of operation”. Sounds were thus free from the composer’s will as he mentioned in his Interview on silence. F.W.J. Schelling reffers in one of his works About the relationship between the plastic arts and nature to the concept of mimesis as imitation and he remarks that there are two manners to imitate nature: 1) in a first and usual sens, imitating nature would suppose the imitation of nature’s products as fixed, well established forms while 2) in a second sens, nature is considered as an eternally creative force [our underlining] generating a living essence which is active in nature’s products. In this second case the beauty results from that life, that dynamics which is active inside nature’s products and the artists should represent that living essence (Schelling 1992: 477-535). Or this is, in our opinion, the way John Cage considered sounds as belonging to nature.

W. Kandinsky in his Spirituality in Art rediscovers these ideas at the beginning of the 20th century (Kandinsky 1993). He remarked that the new art of the 20th century felt the need to go back to origins which it found in nature or in the inner human life. The new art was looking deeper, for subtle emotions, unexplainable, impossible to imagine before. “The art for the sake of art” was “a worn out” theory considered Kandinsky and many other artists of the beginning of the century.  The movement or the action was the real subject of this new art, the movement of thought and the movement of life. Schonberg and his music marked the beginning of the “music for the future”. It was “the new beauty”.

In paintings, the expression through color was a pure pictorial notation. Color was that component of painting capable to suggest the flow of life, the continuous becoming. 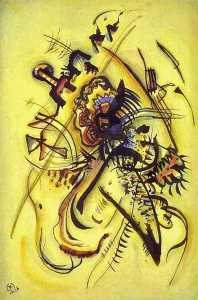 Wassily Kandinsky, To the Unknown Voice (1916)