Gender equality is a key category in the modern value system and is an important indicator of the progress of university educational institutions. The variety of publications on the topic of gender equality is very dynamic and in recent years has become a leading issue in the research space. The conducted researches focus on the gender imbalance in:

- the management of academic and research institutions.

Moreover, the distributions by gender change both in time (taking into account the different periods and years) and in the spatial (referring to the states and regions) aspect. Undoubtedly, comparisons with the past show an increase in the number of women involved in research and scientific management, but there are differences between countries, as well as in the way the topic is set and considered. In the European context, there are many initiatives, programs and measures aimed at achieving gender equality in various social spheres, but significant results have not been achieved everywhere. It is therefore of great importance to implement the policies that are adopted, as well as to promote the initiatives and results themselves, which are good examples of gender equality.

This article aims to show how gender equality is positioned in the Bulgarian context, especially in the South-West University "Neofit Rilski", which is an example of a classical university, including specialties in both sciences, humanities and social studies. The article traces different data by gender, related to: university students - bachelors, masters and doctoral students; to the teaching staff, to the faculties and the rector's level. The aim of the article is to present the gender profile of students, lecturers and academic management structures, as well as to outline specific conclusions about the essence and condition of the considered levels and visions.

In everyday consciousness, there is an understanding that there are university majors that are more suitable for men; and, technical, computer and science specialties are most often cited as examples. On the other hand, specialties related to the humanities and social studies are assessed as more suitable for women. This division has characterized the structure of Bulgarian education and student preferences for decades. The established stereotypes imposed in the connection of gender with the type of university education also have an impact on the professions, as such, which are more suitable for men or women, respectively. The research and academic work in Bulgarian conditions is not necessarily related to gender disparities, because there is an established tradition of directing women to teaching and research. Today we are witnessing a serious entry of women into research and academia - both in the institutes of the Bulgarian Academy of Sciences, as well as in the universities and in the academic managements.

If we turn to the data of Eurostat, we find that in 2019. about „210.4 thousand people in our country have worked in the fields of science and engineering. Of these, 105.5 thousand are women and 104.9 thousand - men, which is a share of just over 50% for women. In comparison, the average for the European Union (EU) share of women in science and engineering is 41% of all employed in the sector (6.3 million women and 9.1 million men, respectively). The largest share of women in science and engineering is in Lithuania - 54.9%, Latvia - 52.7%, and Denmark - 51.7%." https://www.investor.bg/evropa/334/a/bylgariia-e-sred-stranite-v-es-s-nai-visok-dial-na-jenite-v-naukata-i-injenerstvoto--321693/.

These figures are indicative of the fact that women are very well positioned in academic and research activities in Bulgarian conditions. The picture is similar in universities. In general, research and teaching provide lower salaries than in business and politics, but the university and academia are preferred as institutions that require creativity, teamwork and activity, being socially stable and attractive to women.

There are various studies that focus on this - why it is important for women to be part of professional structures in science. According to Žaleniene (Žaleniene et al., 2016: 238), women in science contribute to "general fairness, democracy credibility, as well as research relevance and quality". The main accents related to the participation of women in research activities have psychological and social expressions:

- impose new topics in research issues and its relevance, such as ethical issues, environment, social issues (Nielsen and Huse, 2010);

- change the model of communication and leadership style.

Women's participation in research and academia is stimulated at different levels: European, national, regional and is reflected in the implementation of  a series of measures and projects aimed at expanding women's inclusion.

The project "SPEAR" Supporting and Implementing Plans for Gender Equality in Academia and Research" under the program "Horizon 2020"of the EU is a specific approach and solution related to increasing women's participation in science. The project involves universities and NGOs from Denmark, Germany, Hungary, Sweden, Austria, Croatia, Portugal, Lithuania and Bulgaria. On the Bulgarian side, two universities participate: SWU "Neofit Rilski" and PU "Paisii Hilendarski".

The main objectives of the project are related to:

- raising the awareness of the different communities on the issues of gender equality;

- reassessment of values and deriving the gender equality in people's understandings as important;

- change of thinking and experience of different prejudices related to gender balance;

- introduction of good practices from other European universities and research institutions related to women's participation in research;

- improving women's perspectives and their participation in university governance;

- dynamizing the repertoire of research topics within the university and drawing attention to the problems of gender equality;

- development of plans for gender equality, with a view to implementation in the university structures.

As one of the partners in this international project, the SWU team conducted a series of research activities aimed at analyzing gender equality in the university environment, outlining the problem and identifying measures to improve it.

4. Gender equality in the structure of South-West University

One of the first tasks within the project activities was to establish the gender structure at the university, which means to trace the gender composition of:

It can be said that in all three categories at the South-West University a stable gender balance is maintained, and in some cases there are significantly higher percentages in the representation of women. The presented results refer to a specific period of time - 2020/2021 school year, but the data are indicative of a positive trend in the inclusion of women in various aspects of the academic space: training, teaching, research, scientific and academic management.

Table 1 presents data on the gender structure of students by faculties and in summary for the university.

Table 1 Distribution by gender of students: bachelors and masters

From the data for the distribution by gender of the students several things can be noticed:

-        Female students dominate in number over men, and in most faculties the difference is almost twice, such are: Public health, health care and sports, Economics, Philology, Philosophy faculties.

-        The biggest difference is between female and male students at the Faculty of Pedagogy.

-        In other faculties: Faculty of Law and History, Faculty of Arts, the difference is again in favor of women, but not so great;

-        In the third type of faculties, there is equality in the number of male and female students, as Mathematics and Natural Sciences.

-        The only faculty in which men are more than women is Engineering.

Graph 1 Percentage distribution of students by gender in SWU 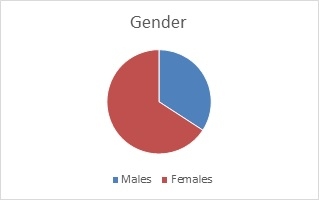 For the academic year 2020/2021 the distribution by gender of Ph.D. students is as follows:

Again, there is a clear dominance in the gender structure in favor of female Ph.D. students.

Table 2 presents data on the gender structure of lecturers on faculties and the university as a whole.

Table  2  Distribution by gender of lecturers

Based on the data presented in the table, at least three trends can be deduced:

-        Faculties in which there is an almost identical distribution by gender of lecturers are: Law and History, Mathematics and Natural Sciences, Engineering faculties. The difference is in the range of 1% to 2% in favor of women or male lecturers.

-        Faculties in which there is a clear dominance of women lecturers over men. These are: Pedagogy, Philology, Philosophy faculties.

-        At the Faculty of Arts, the difference in gender distribution among lecturers is 5% in favor of men.

In summary, women lecturers at South-West University are 59.7% compared to 40.3% male lecturers (Graph 2).

Graph 2 Percentage Distribution by gender of lecturers in SWU 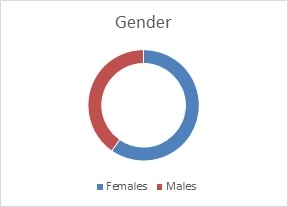 4.4. Governing structures at the university

From the data presented in the table the following accents can be summarised:

-        Among the heads of departments and heads of research centers and laboratories, the percentage of women is close to 60%, which is also an impressive figure in favor of the presence of women..

In summary of the data presented, describing different gender distributions among students, faculty and academic leaders, it can be said that women are very well represented. This is an indicator that the principle of gender equality has been successfully integrated into the university's strategy, and the goals for active participation of women in education and research are a real practice.

The results are indicative of the fact that the gender structure of the South-West University definitely maintains not only gender equality, but there is a clear dominance of the female presence in most faculties in terms of:

This trend, of course, is not a given, it is the result of a modern understanding of the issues of women's participation in science and an awareness of the role of women in academic work and research. In this context, online interviews were conducted with the dean's and rector's authorities in the university to outline the main topics and approaches to gender equality and women's participation in research. In all interviews conducted, it is emphasized that:

"Women's participation in university structures is indisputable. They have a great contribution to the development of the project activity, of the publications, of the teaching work "(male).

The interviews also showed the comparative context of South-West University to other universities and related faculties. It is emphasized that the dean's and rector's management know the structure of gender in other academic institutions and the positioning of the South-West University in terms of gender equality is at a high level.

All this shows that important principles and approaches related to gender equality have been established in the academic space, and it is of great importance that this continues in the future, as the value and understanding of gender equality and the place of women in research and university governance continued to be an leading principle. In addition, it is necessary to develop new measures to facilitate the work of women at the university - as professors and researchers, to find ways to support women's activity and participation in various scientific activities, to deepen collaboration with European universities, with a view to creating an environment dominated by the values of equal rights and non-discrimination, in order to provide opportunities for growth and development free from gender prejudice.

1. The research work was done by the SWU project team and its leader Assoc. Prof. D.Sc.Petya Pachkova

Women in science according to Eurostat https://www.investor.bg/evropa/334/a/bylgariia-e-sred-stranite-v-es-s-nai-visok-dial-na-jenite-v-naukata-i-injenerstvoto--321693/.